Mimic the Octopus[2] is an shapeshifting mimic octopus that was formerly a member of the Diamond Cutters mercenary group, along with Whisper. However, he defected to the Eggman Empire and killed off the members of his team, with the exception of Whisper the Wolf.

At some point before the Eggman war, Mimic was part of the Diamond Cutters, acting as the infiltrator of the group. He was also partnered with Blue Block, who enabled mimic to use his Hammer Wispon.

On one mission, he shape-shifted into an egg pawn in order to infiltrate one of Eggman's bases while pretending to escort the other Diamond Cutters as prisoners.

Mimic, still trapped inside the Test Chamber was sent to the maximum security ward in Everhold Prison.(Sonic the Hedgehog: Bad Guys: #1)

It was there that he encountered Rough the Skunk, Tumble, and more recently, Zavok. Meanwhile, Dr. Starline, requiring hired muscle for his own ends, went to Everhold Prison, enslaving the Prison ward and offered Mimic and the rest of the group their freedom and something for their own. In Mimic's case, he wanted Starline to erase him from Eggman's database in order to avoid Eggman's wrath at his previous failure.

Being a mimic octopus, Mimic had the ability to shapeshift into anyone, from Sonic to the members of the Diamond Cutters, his former crew. He is able to mimic anyone, even down to their voice.

During his time as a Diamond Cutter, he made use of his Hammer wispon.

In addition, he has made use of his own extreme gear, Omnipotence.

He has boasted that he has escaped from a prison egg. 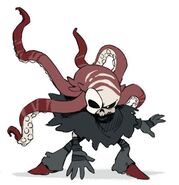 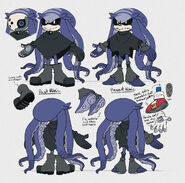