IDW Sonic Hub
Register
Don't have an account?
Sign In
Advertisement
in: Infobox incomplete, Incomplete Articles, Articles that need to be updated,
and 5 more

Lanolin[1] was a female sheep who was a part of the Resistance and later became a member of the Restoration when the resistance was disbanded. The character herself was originally nameless, with her name only mentioned by the artist Adam Thomas. It was then confirmed to be her official name by Ian Flynn.

When Sonic visited Riverside and helped Amy defend the village against a Death Crab, the sheep lady alerted Sonic to an incoming Badnik force. (StH: #2)

After the Resistance was reformed into the Restoration, Lanolin can be seen carrying away a pile of papers, and can be seen assisting matters in Restoration HQ.

She was one of the few survivors aboard the rescue shuttle when the Restoration HQ was breached.

After the evacuation of Restoration HQ and relocation to Angel Island, Lanolin can be seen in one of the pilot chairs of the lone shuttle that evacuated. She was extremely worried when Sonic, infected by the metal virus was hanging on the back of her chair. (STH#26)

After the end of the Metal Virus, the female sheep was among the others celebrating in Spiral Hill Village.

While Belle the Tinkerer was shown Restoration HQ, Lanolin can be seen there. (STH#37)

Apparantly, Lanolin was seen in the Park Zone, although seperate from Amy and the rest of her group.

The female sheep is shown to be easily startled. whether it is from badniks to even being mentioned by her boss.

Lanolin is a fluffy white sheep. Her hair-like wool is kept in check with a hair bow. She has small horns on top of her head which was originally red, but has since changed to black. She wears brown track pants and brown hiking boots. She had an orange tank top and a collar which has a large bell attached to it.

When the HQ was evacuated via the rescue shuttle, Lanolin wore a jump suit.

Lanolin was created by Adam Bryce Thomas as a background character in Sonic the Hedgehog #2. In supplement issues, Thomas would draw in Lanolin (usually with a new look). Writer Ian Flynn would later confirm Lanolin's name.[3] 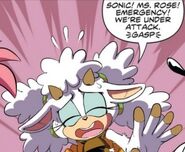 The cover where the sheep character (Lanolin) is seen