Jewel[1] is a character that appears in the Sonic the Hedgehog comic series and its spin-offs published by IDW Publishing. She is an anthropomorphic beetle and the curator of the Mineral Museum. Jewel is the best friend of Tangle the Lemur.

Jewel is an anthropomorphic beetle with primarily light blue skin. She has an even lighter blue exoskeleton with pink, yellow, green, and blue highlights to give it a rainbow-like color. Her antennae are light blue. The interior of her wings are cream. Jewel has pink eyes and a white muzzle. For attire, she wears a pink jacket with a matching pink miniskirt, white gloves, navy cufflinks, navy stockings, and pink high heels.

Jewel has been a resident of Spiral Hill Village for years. She grew up with Tangle the Lemur, who became her best friend. Jewel would constantly look out for Tangle, as she had a tendency to run into danger head first. Over the years, Tangle would find several items during her adventures, which Jewel used to curate the Mineral Museum.[3]

One day, as Jewel was working in her museum, Tangle barged in, startling her. Tangle introduced Jewel to her new friend, Whisper the Wolf. Jewel introduced herself and the museum, explaining how Tangle helped collect items for her to curate the museum. Soon though, the sky ominously turned dark. Whisper immediately after pulled out her Variable Wispon as she had heard a scream come from outside.[3]

Jewel was later working in the Mineral Museum, when she found Tangle recklessly swinging around in the streets of Spiral Hill Village. She asked for Tangle to stop before she ran into someone but Tangle refused as she knew the streets well enough not to. However, Jewel was right in her guess as Tangle soon crashed into Ron's chili dog cart. The duo then ordered chili dogs and returned to Jewel's museum. There, Jewel mocked Tangle for running into a stationary object and asked why she had been so restless lately. Tangle told her that the reason for that was because after fighting against robot invasions and meeting Sonic the Hedgehog and his friends, she no longer wanted to return to her boring life in Spiral Hill Village. Jewel asked her what was stopping her from finding adventures on her own, to which Tangle replied that she did not wish to have Dr. Eggman's Badniks attack the town again. She also stated that she would feel lonely without Jewel by her side. Soon though, the duo heard a crash from outside. Jewel immediately cowered behind her desk, worrying that the Babylon Rogues had returned. Tangle, however, told Jewel to hide while she checked the situation out.[4]

The Catalyst and The Last Minute

Jewel was one of the many citizens of Spiral Hill Village to be affected by Eggman's virus and became a zombot. Before Tangle entrapped her friend in one of the exhibit cases, the beetle infected Tangle with the Metal virus, which was slowly spreading.

After the Zeti usurbed his faceship and his zombot army, Zavok commanded his portion of zombies, which included Jewel, towards angel island.

Jewel, alongside the others infected were cured wyhen Super sonic and Super silver used the warp topaz to purge the virus.

Jewel is a well mannered person with a bright sense of humor. Where Tangle is reckless and loud, Jewel is more reserved and cautious. Jewel is also quite cowardly and dislikes fighting very much.

Jewel has the ability to fly with her wings, as long as her elytra is intact.[3] Jewel is able to hide inside her carapace, making her look like a jewel.

Jewel and Tangle have been best friends since their childhood. Jewel would always be there to look out for Tangle and make sure she did not fall into perilous danger. Though Jewel can get weary of Tangle's recklessness, she still cares for her.[3] 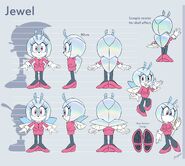