The ROAD TO #50 continues here! Enjoy a TEN-ISSUE long adventure leading up to the EPIC SHOWDOWN in milestone issue #50.[1]

A surge of imposters spells trouble for Sonic the Hedgehog, Tails, and even Eggman! Dr. Starline is pulling every tool from his kit as he creates his fastest and smartest inventions. An all new mini-series from Sonic writer Ian Flynn, Imposter Syndrome #1 will have readers seeing double![1]

Cover A. Art by Mauro Fonseca. Colors by Joana Lafuente. 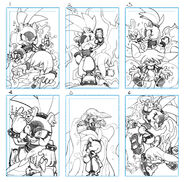