The Green Wisp is a type of Wisp. As its name suggests, it is green in color.

At some point in the past, the Green Wisps, along with other fellow Wisps, and their planet came under the threat of Dr. Eggman. Fortunately, they were saved by Sonic the Hedgehog. Afterward, a bunch of Green Wisps and other fellow Wisps settled down on Sonic's world where they helped out the residents of Sonic’s world whenever they could, the Wispons being one such way of helping in particular.[1] (StH: #3)

The Diamond Cutters were allied to a group of wisps so that they could be used to power their wispons. A green wisp named Green Hover worked with Claire Voyance, the telepathic operative, to power her green wispon. After its partner and the rest of the diamond cutters were decimated in Mimic's trap, it and the rest of the wisps sided with the other surviving member, Whisper. This Green Wisp would help out Whisper by powering her Variable Wispon under various circumstances. (StH: #8)

During the war between the Eggman Empire and the Resistance, Resistance soldiers would use Deployment Pods to send willing Wisps onto the field in order to help on the battlefield. (StH: #3)

Near the end of the war, a town that served as a hub for Wispon distribution was saved and subsequently conquered by mercenary duo Rough and Tumble. As a result, many Wisps, including several Green Wisps, were hoarded in Deployment Pods and Wispons by the two skunk brothers. (StH: #3)

In the town that Rough and Tumble had taken over, the Green Wisps found salvation when Sonic the Hedgehog and Knuckles the Echidna arrived to stop the two mercenaries. During the heroes' subsequent fight with Rough and Tumble, the Green Wisps and their fellow Wisps were convinced by Sonic to not let the two villains boss them around. As such, the Wisps in Rough and Tumble's Wispons left them, leaving their arsenal powerless and allowing Sonic and Knuckles to defeat them. Afterward, the now-liberated Green Wisps decided to stick around and help the villagers defend their town by powering their Wispons. (StH: #3)

During a trip to one of Dr. Eggman's bases, Whisper and her team of Wisps (the Green Wisp included) encountered Sonic and Silver the Hedgehog. Despite Whisper's initial mistrust, once her Green Wisp and other Wisps openly greeted Sonic, Whisper chose to team up with the duo. When the newly-formed trio then took on a horde of Badniks, Whisper's Green Wisp came to Whisper's defense when she was at the mercy of the robots. Fortunately, Sonic and Silver destroyed the Badniks before they could harm them. (StH: #8)

The security guards at Everhold Prison were armed with Hover Wispons, which were powered by Green Wisps. (#1)

The Green Wisp resembles a spaceship. It has a round body with a small fin on top of its head and one blue eye in the middle of its head. Unlike most other Wisps, which have three tentacles, the Green Wisp has three sphere-like structures stemming from the bottom of its body.

Being a Wisp, the Green Wisp is peaceful, helpful, and friendly of nature, and it enjoys spending its time with others. It gets especially well along with the good people of Sonic's world, whom it would gladly help out whenever it was needed.

The Green Wisps is not much for fighting. However, it is nonetheless brave and good-hearted. As such, it does not approve of amoral behavior and will not stand idly by when its friends need it.

The Green Wisp is able to levitate in midair at will, which serves as its main method of transportation.

The Green Wisp is able to generate and store its own unique variant of a powerful energy inside its own body. The Green Wisp can as well pass on a fraction of this energy by phasing into the recipient. 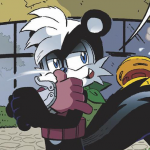 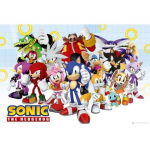 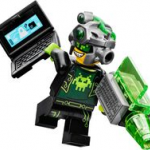