Dr. Ivo Robotnik, also known more commonly by his nicknames Dr. Eggman and more simply Eggman, is an evil scientist and dictator who seeks to rule over the entire world. He is ever persistent in his quest for world domination despite his constant losses at the hands of his most hated enemy Sonic the Hedgehog and his allies. After losing the war between his Eggman Empire and the Resistance, Eggman had lost his memory and taken up residence in Windmill Village under the alias of Mr. Tinker, but has since regained his memories and returned to his old ways.

Dr. Eggman had been battling Sonic for some time. Their earliest known conflict included a battle between the two where Eggman piloted his Egg Viper mech, but Sonic winded up defeating him.[5] (StH: #1)

Another encounter involved the Space Colony ARK, in which Eggman used its Eclipse Cannon to blow up a part of the moon in order to show the world the power that he wielded. These events lead to Eggman teaming up with Sonic, Miles "Tails" Prower, Knuckles the Echidna, Rouge the Bat, and Shadow the Hedgehog to save the world.[6] (StH: #5, #6)

Later, Eggman was betrayed by Metal Sonic, who had somehow transformed into a new form known as Neo Metal Sonic. Neo Metal Sonic disguised himself as the doctor and tried to take over the Eggman Empire. Sonic and his friends did battle with the fake Eggman, who piloted the Egg Emperor, but the heroes prevailed and defeated the robotic menace, causing it to revert back into its normal form.[7] Eggman, would then repair Metal Sonic and remove its rebelliousness from its coding. (StH: #1, #7)

When the Black Arms invaded, Eggman was on his own side fighting against the villainous extra terrestrials, who were eventually defeated.[8] (StH: #6)

Eggman would return to his evil ways once again. Sonic faced off against Eggman in his Egg Dragoon and defeated the villain.[9] (StH: #1, #5)

Later, Eggman built an interstellar amusement park that used the power of the Wisps. Sonic freed their world, Planet Wisp, from Eggman's control and saved the kind creatures, putting a stop to Eggman and destroying his park.[10] (StH: #3)

Following this, Eggman discovered the Time Eater and used its powers to mess with time, but Sonic winded up defeating them and saving the day.[11] (StH: #5)

Sonic would later follow Eggman to the Lost Hex for another adventure in which Sonic had to save the world.[12] (StH: #3)

The Elimination of the Diamond Cutters

After the completion of some of their operations, Mimic willingly bartered his fellow Diamond Cutter members to save his own life. Mimic convinced the group to raid one of Eggman's facilities, in order to bait them into a trap with Eggman's help. Dr. Eggman witnessed the activation the Shadow Androids on his screen. Realizing that only three of the Diamond Cutters were accounted for. Despite claiming that Whisper was only a scout and not a major threat, Eggman ordered him to finish the job.

Mimic then brought back Whisper's abandoned Orange Wispon as well as using his own Diamond Cutter's mask as belonging to Whsiper's to confirm to Eggman that the Diamond Cutters were finished for good. He would eventually find out that Whisper was alive during the war, becoming a beacon of hope for the people and serve as a major annoyance to the Doctor like Sonic. He then orders Mimic to finish the job that the infiltrator falsely claim was completed, and which resulted in the Doctor not so trusting of Mimic.

More recently, after getting ahold of a mysterious artifact known as the Phantom Ruby, Dr. Eggman began preparing for what he assumed would be the final battle. One of these preparations was deciding to upgrade Metal Sonic into its Neo Metal Sonic transformation once again in order to use it as his greatest weapon in said final battle. Even though the upgrades were still taking place, Eggman successfully defeated and captured Sonic and conquered the majority of the planet. Thanks to the help of the Resistance (formed by Sonic's friends and allies and comprised of many more soldiers), other allies, and a past version of himself from an alternate reality, Sonic was freed and helped to stop Dr. Eggman's conquest and save the world from his clutches.[13][14] This ended in a confrontation between Sonic and Eggman, the latter piloting his latest Death Egg Robot. (StH: #1, #7)

After his Phantom Ruby plan fell through, Eggman vanished without a trace, though his Badniks continued to operate on their own. In reality, an unconscious Eggman suddenly appeared in a village one day. The villagers locked him up immediately, only to return the next day to find that he’d broken out to fix up the door to his own cell. The doctor was put through numerous tests, where it was determined the dictator had no recollection of his old, villainous life. After nursing his wounds, the village took "Mr. Tinker" in as one of their own, who repaid their kindness by fixing anything they brought him, even going as far as to build them windmills. (StH: #1, #5)

During his amnesia, he also used badnik parts to create a wooden puppet-like robot named Belle. Whilst Eggman's former badniks were minimalistic in design and made of metal, Mr. Tinker embraced a different style of design with the parts. He then introdcued the wrobot to the villagers.

As Sonic and his friends worked to stop the fallout of their recent war, the Chaotix Detective Agency launched their own investigation to find the Eggman. After receiving a tipoff from an unknown source (later revealed to be Rouge the Bat), the Chaotix tracked down Eggman to the village where he was living a new life. The village head explained what had happened and why Eggman was there. Though considered a blessing by the townspeople, Sonic was not convinced, that is, until the hedgehog caught Tinker hiding in fear from a badnik attack with fellow citizens. After helping the Chaotix to do away with the badniks before they could reach the village, Sonic had accepted that Eggman really had changed. Sonic prepared to speed off to his next destination, only to become alarmed when Tinker expressed his hope that the hedgehog would come back to visit so that he could show him "Eggman Land" once it was completed. Sonic could barely begin to dwell upon what he’d just heard, when Shadow the Hedgehog and Rouge showed up with the intention of destroying the doctor. Sonic fought Shadow to a standstill as the hero tried to convince his shady counterpart to spare the doctors life due to his believed amnesia. After realising that Sonic had lured him away from the village, Shadow returned to the village to find Tinker in hiding, with Rouge watching over him. The hedgehog abrasively demanded that he show him "Eggman Land", to which Tinker complied: he took the heroes to a cabin that held a kids play area that he'd been constructing in secret. Tinker explained that name "Eggman Land" came to him while constructing it, and believed it to be a ridiculous-sounding name that the kids would find funny. The heroes were once again reassured of Tinker’s situation, though Sonic still worried that his recollection of "Eggman Land" was a sign that his memory could eventually return. (StH: #5, #6)

During the battle against Neo metal Sonic and his force, Mr. Tinker was singing on his banjo while the children were playing in his Eggmanland funpark. He was then abducted by a liberated Rough and Tumble, who took him to his final Egg base. There, he met the one who hired the kidnapping, Dr. Starline, an avid admirer of the evil Doctor and was determined to bring him back again. Starline then subjected Eggman by aggressive hypnotherapy and shocking treatments in order for Eggman to regain his memories

Some time after he believed that Whisper and Tangle were killed in the explosion, he began to communicate to Doctor Eggman that he succeed in eliminating the last Diamond Cutter. Eggman, however, was not convinced, especially when Mimic previously lied, and that by letting her live she became a beacon of hope during the war. He then ordered Mimic to search through the entire wreckage to see if there were any signs of them. Mimic then returned to where the Egg Bunker formerly stood, where he was amazed that they survived from inside the still standing safe. Whilst being berated by Eggman, Mimic discovered tracks that were deliberately placed. He then told Eggman to shut up, which angered the Doctor. Mimic in response told his boss to relax, saying that he now knows where his target is, but that he would need reinforcements.

Dr. Eggman is depicted as a human with a rotund and burly appearance, his torso and head coming together in an egg-like shape. He possesses no visible neck, a bald head, a bright red nose, and a very bushy mahogany moustache. He also has long, almost disproportionately thin arms and legs.

For attire, Eggman wears tinted, navy blue pince-nez glasses and green-lensed goggles as headwear and an elegant, red coat sporting two square metal buttons on both sides of the chest in gold. These buttons have white straps that run across the coat's sides to identical buttons on the back. The coat also has silver, zipper-like linings down the back, arms and front, yellow cuffs, and two extensions on the front that have large silver buttons. In addition, Eggman also wears white, cuff-less gloves on his hands and a pair of black pants with matching boots seemingly attached to them bearing circular plates on the both sides of the ankles and three square ones riding up the shin.

After losing his memory and gaining the new alias "Mr. Tinker", Eggman began to wear green overalls, a pink shirt, and pink and green slippers.

Dr. Eggman is an evil and megalomaniacal genius who is constantly planning to take over the world. Arrogant, raucous and narcissistic, he prefers to show up and claim responsibility whenever he is carrying out his villainous deeds and make himself known to his enemies after he comes back from a defeat; as put by Sonic, subtlety is not Eggman's forte.

As revealed by himself in Sonic the Hedgehog #26, when it comes to designing machines, he prefers to worry about making sure they look nice aesthetically, rather than making sure they work as intended.

As Mr. Tinker, Eggman displays a very different disposition, being a friendly, humble and modest man who loves children and helping others out. Mr. Tinker also displays a somewhat cowardly streak, being afraid of his own robots, although it does not keep him from helping and comforting the innocent.

Eggman is a brilliant scientist and inventor with seemingly limitless mastery over technology. His remarkable skills as an engineer and programmer are best evidenced by the armies of robots and mechs he has created for his numerous schemes. He is also an incredibly skilled pilot: able to manipulate many different kinds of his own mechs, robots, and vehicles in difficult battles with Sonic.

it was mentioned by Rouge that despite his paunch, Eggman has a cardio regimen. 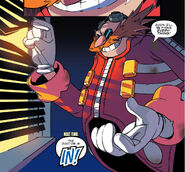 Eggman's debut appearance in the issue 4.