None (designed as female)

Belle the Tinkerer is a character that appears in the Sonic the Hedgehog comic series and its spin-offs published by IDW Publishing. She is a robot based on a female anthropomorphic animal from Sonic's world. Unlike normal robots, Belle is made entirely of wood.

Belle was conceptualized and designed by Evan Stanley. The crew at IDW Publishing wanted to introduce a character with a recognizable design and concept that would them stand out and yet fit into Sonic's world and cast. Eventually it was decided that Belle would be a robot (a common concept) designed like a marionette doll (a new concept).

Late in her design phase, it was decided to add jawlines under Belle's mouth in order to make it clear that she was a robot.

Belle is a robot made entirely out of oak hardwood, giving her a marionette doll-like appearance. Modeled like an antropomorphic animal, she has orange fur and a tan muzzle. She also has medium-length braids that are held together with green bands at the ends and a large fuzzy tuff of hair-like fur or fur-like hair on her forehead.

She also has blue eyes, three freckles on each cheek, buck teeth, and a round pink nose (akin to a clown nose). Her eyelashes also have thick ends.

Her arms and legs on the other hand are tan and rectangular in shape. Lastly. she has an orange thread with a tuft at the end for a tail.

Sometime after an amnesiac Eggman took on the persona of Mr. Tinker and became a name for himself within the village. He created and showed off Belle as a new creation. Whilst using simiar components to Eggman's badniks, it was an unconventional design. While the villages were nervous that her creation ws a sign of Eggman's original memories and persona were resurfacing, they warmed up to his new creation.

Sometime after Belle was created, her creator (whom Belle referred to as her "Dad") went missing and she decided to look for him. After everybody was cured of Dr. Eggman's metal virus, the villagers of windmill village began scrapping the contributions of "Mr. Tinker" and viewed Belle to be a spy.

During her search, she came across an abandoned Eggman base near Windmill Village.

Sonic fighting Belle, from Sonic the Hedgehog #34. When Sonic the Hedgehog and Miles "Tails" Prower entered the abandoned Eggman base, Belle would sneak through the shadows of the base, avoiding the boys' attention, and later hide in a pile of scrapped robots.[6] Eventually though, Belle fell out of her hideout when Sonic accidentally kicked a screw into it. Sonic immediately mistook her for a Badnik and attacked while trying to guess her name. However, Belle kept avoiding Sonic's attacks until he pulled her tail. This caused her to kick Sonic with both legs by reflex, which she apologized for. Eventually though, Tails stopped Sonic and explained to Belle that they usually meet robots that belong to Eggman's army. Belle explained that she was not created by Eggman, but by another creator she had been trying to find for a while. Tails was likewise impressed that she was made entirely of wood. However, they were interrupted by an alarm in the base that was triggered after Tails forgot to turn off the local computer's firewall. Beats then arrived and surrounded the heroes. While Sonic and Tails were discussing how to get out of their current situation, Belle noticed that an Egg Keeper was trying to catch Tails. She thus pushed Tails away, leaving her to get immobilized by the Badnik herself. Fortunately, Tails destroyed the Egg Keeper and freed Belle. Sonic then told Belle that they would have to take advantage of her unusual abilities as the situation around them got worse.

After Tails made an escape route for them, Belle rescued Tails when he was caught by an Egg Keeper by making a leap that pulled Tails out of the Egg Keeper's grasp after pulling her tail. Sonic then dragged both of them outside the base. Afterward, Belle asked them to take her with them to White Park Zone as her current hideout had been taken over by Badniks. After Tails convinced Sonic to let her come along, the latter had Belle chosen a wing on the Tornado to ride on all the way to White Park Zone but did not enjoy the ride. After being sat off at the White Park Grand Chateau, Belle was still shaky from the flight. Amy then led Belle and Sonic to the suite of Clutch the Opossum, who was lying unconscious on the floor. At the same time, Cream wanted to release the Chao Clutch had locked in a cage with numerous locks. Upon hearing this, Belle decided to help Cream open the cage since tinkering was her specialty. Cream then introduced herself to Belle. Soon after, Clutch got up and activated the Badniks in his suite, before escaping himself. Belle was then surrounded by hostile Badniks again.

Belle was later led to the Restoration's new HQ by Sonic and Tails in hopes of instating Belle into the organization and give her a new home. There, they were welcomed by Amy and Jewel. After Belle said that she was good at carpentry work, Jewel sent her to the machine shop. There, Belle tried to help the chief there, but her clumsiness only got her into trouble. When a forklift later ran over her tail, Belle automatically kicked the crate she was carrying into a boat hanging from a frame and broke its restraints. This caused a panic in the shop, but Tangle quickly came and stooped the boat's fall. Belle, however, lost her job in the workshop because of her screw-up. As Tangle took Belle with her, Belle confessed to Tangle that she had a difficult time in the Restoration. Tangle, on the other hand, quickly became excited over the function Belle's tail had, which she could relate to. Moments later, they both heard rumors that a new Eggman tower, which was causing unnatural storms, had appeared outside the coast. Tangle and Belle thus went to Jewel, where they met Sonic, Tails and Amy. While the others talked, Belle wondered if "he" might be in the tower. However, she refused to say anything because she would then have to explain herself. Regardless, she gave Tangle the idea of the two of them getting to the tower and helping Sonic investigate it themselves. Belle subsequently took Tangle to an unused Big Bang Extreme Gear that she had hotwired. Immediately after, Belle and Tangle rode it out of the HQ.[3] Arriving at Eggman's tower, Belle and Tangle crashed the Big Bang upon landing, depriving them of one of their means of escape. Passing the broken Badniks in front the entrance, Belle followed Tangle into the tower while taking notice of the Eggman Empire decal on the wall. The duo soon after ended up in a room full of Badniks. Not yet detected by the robots, Belle and Tangle climbed the interior of the tower while avoiding detection until they came upon Orbot and Cubot discussing Sonic, Tails and Amy, who had broken into the tower and ended up inside the test chambers for Eggman's robots. After watching the robotic duo relay these news to Eggman, who decided to make use of this opportunity, Belle asked Tangle if that was Eggman's voice she heard. After Tangle confirmed that and began heading out to help Sonic, Belle accidentally slipped and fell down right in front of some Egg Pawns. However, the Egg Pawns did not detect Belle. Belle was then pulled back up by Tangle, who demanded an explanation. Belle thus told her that she was a Badnik herself and that she came to the tower to seek answers about her origin from Eggman. She assured her that she did not want to hurt anyone, but understood if Tangle did not trust her. To her surprise however, Tangle chose to trust her anyhow, and the two resumed their search for Sonic and co.[4]

Belle and Tangle soon after found and restrained Orbot and Cubot. They then tried to get the robot duo to tell them which one of the portals in the facility would take them to Sonic, Tails and Amy. Meanwhile, Belle redirected the Egg Pawn patrols so that they could not intervene with their interrogation. When Tangle later got the information she needed from Orbot and Cubot, she tried to head into a portal to rescue Sonic and co., but Belle stopped her, as she feared for her safety. However, she was persuaded by Tangle to let her do it and allowed the lemur passage into the portal.[5]

Belle is quite shy and a bit timid. However, in the face of real danger, she can leap into action. Apparently a pacifist, she cannot fight, nor does she like it, so she tries her best to avoid conflict.

Belle is quite flexible and has great reflexes, being able to successfully dodge all of Sonic's hand-to-hand combat attacks.

Belle's fingers conceal various handyman tools inside them that she can reveal by opening her fingers. One of the tools concelled is a lighter, which the wooden android is reluctant to use.

Her tail also possesses a unique function that makes Belle kick backwards by reflex when it is pulled. This functionality can be used by Belle to make herself perform enhanced jumps. 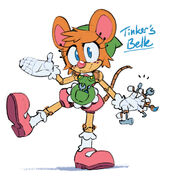